Why are we monogamous?

Why do so many marriages (and relationships) fail?

Why do we frown on polyamory?

YOUTUBE r991pr4Fohk Professor Marston and the Wonder Women: A true story of polyamory

# What can we learn from horses...

Species such as horses, lions and gorillas live in a very different way to ourselves. Their society is matriarchal. It is based on a female herd with a single male whose purpose is reproduction.

I know more about horses than any other species. Wild horses live in herds. There are usually a large number of mares with one lead mare. The mares have a lot of power as they operate as a unit. The stallion only gets to mate when the mares are in season. It would be very dangerous for him to approach at any other time as the mares will gang up on him. And their weapons are as strong as his (teeth, and hooves!)

He drives away his male offspring before they are reaching sexual maturity. The juvenile males play fight together and sometimes tempt mares to spend time with them. The stallion watches carefully and tries to prevent these digressions. Should one of these encounters result in conception he will destroy the foal as soon as it is born.

The younger stallions will challenge him to a dual for the right to the mares. If he fails (and fail he eventually will) he will be driven away...maybe even severely injured. The system ensures the strongest genes are propagated.

*I can't help wondering whether we used to live in a similar way?*

This form of society gives a lot of power to the females. The males have to compete for sex. Maybe at some stage the males of our species realised this and decided to share out the females. This would reduce their power and increase their fear...They would be much easier to control and there would be less fighting.

I never questioned any of this until my path crossed with an amazing horseman called Willy Sidorak. Willy was in the process of creating a centre for ethical horsemanship in the Auvergne region of France. The times I spent there were to change my whole perspective on horsemanship and the meaning of empowerment. It was also to question my own beliefs on polyamory.

Willy not only trained horses, he lived like them! The first time I went there he was living with 6 women. I was shocked and rather titillated. I was to visit the centre many times and to realise that perhaps these were the happiest group of women I had ever met.

You can read about Willy's approach to rehabilitating horses here: Saving Tamtam

I am not saying polyamory is for everyone (or even for me!), I'm just exploring my own reaction to it and curiosity about it. I went on to create a CLD of "the case for polyamory"... 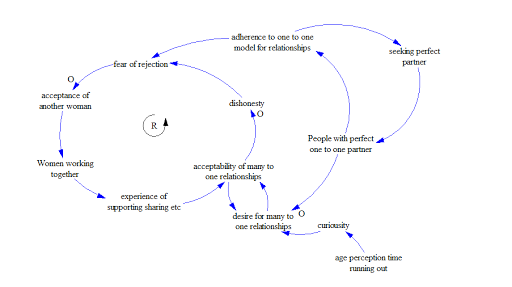 I watched the Louis Theroux documentary on polyamory. I note that in this interview he says that the key to its viability is the women really liking each other. Interestingly this was the base of Marston's relationship with his ladies too.

YOUTUBE JLZkxdqd2HM Louis Theroux interview re his documentary on polyamory

John David Garcia used discussions of sexual ethics with his experimental octets. This is a quote from chapter 4 of his "Creative Transformation"

*"As a hint in solving the problems of sexual ethics, I might add that a general consensus (not necessarily correct) of the octets was that (1) sex without love is unethical; (2) love without sex is ethical; (3) love always involves commitment; therefore, (4) sex without commitment is unethical. A less obvious conclusion was that (5) sex totally unrelated to reproduction might at best be trivial and at worst destructive. You may use the examples of the next two chapters plus the ethical theory of Chapter 3 to derive your own analysis about sexual ethics. A final general, but not universal, conclusion was that (6) ethically committed, heterosexual monogamy is the most creative form of sexual behavior, contrary to the "Playboy Philosophy" and recent popular practice. These conclusions were surprisingly conservative compared to ethical conclusions in other fields. A corollary is that we should not expect to find love through sex, but that we should learn to love from our soul and make ethical commitments before experiencing sex, if we are to be maximally creative as a couple. The fact that this is rare is a defect in our culture. One consequence is a high divorce rate leading to many millions of single-parent families."*

YOUTUBE wlqsyksgGuk Interview with the actors in Professor Marston and the wonder women.

How does this make you feel? What do you think?

You can read more about Professor Marston's views on the Emotions of Ordinary People in his book.